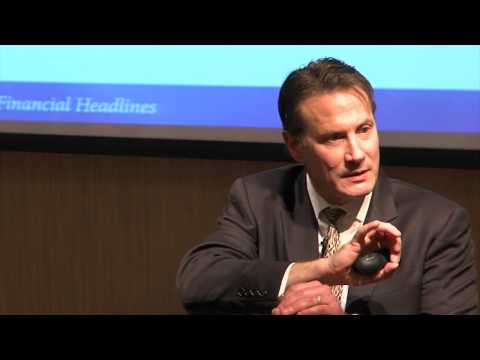 I was at the Digital Asset Transfer Authority (DATA) annual meeting today. Can't give you all the details of conversations, but I'll give an overview of the speakers, panels, and general sentiment.
Keynote
David Andolfatto, Federal Reserve Bank of St. Louis academic, gave the opening talk. It was a high level, but interesting, talk about what money is (a ledger) and how digital currencies are a natural evolution. However, he didn't think Bitcoin was good money, because it had an inflexible supply, and someone needed to manage the money supply (like the Fed). He was generally positive about Bitcoin (he specifically said it was "a stroke of genius") but didn't think it could really compete with centrally planned money.
First Panel
The first panel was about the evolution of money and had Susan Athey, econ prof from Stanford. She had some good insights about data mining the blockchain. John Clippinger from MIT Media Lab had some great thoughts about managing identities and maintaining privacy while still giving regulators what they need. David Schwartz, cryptographer from Ripple labs, didn't add much but had good thoughts. The panel was rounded out by Erik Voorhees, who was excellent as always and presented the liberty position well.
Second Panel
The next panel was about remittances as a use case. Jerry Brito from Mercatus and Michael Faye from GiveDirect talked about how digital currency could disrupt, particularly in Africa. A good nuanced point that came out was the idea that even though Bitcoin clearly has benefits over speed and cost of existing systems, for remittances having local agents is incredibly important and building those networks is very difficult.
Third Panel
The third panel was about merchants, and was one of the better panels. Jonathon Johnson, Chairman of Overstock.com, talked extensively about Overstock's decision and the results so far. He mentioned something I didn't know: Overstock doesn't convert 100% of bitcoin to fiat, they keep 10%. They do this because some employees have requested payment in bitcoin, and they want to pay eventually. He also mentioned that they were going to work with vendors to try and pay them in bitcoin.
Also on the panel were Tony Gallipi from Bitpay and Martine Niejadlik from Coinbase, who explained what their companies do. Tony gave a good response to a Dogecoiner who basically asked why they don't accept anything but Bitcoin, walking him through their decision framework for accepting currencies.
Fourth Panel
The fourth panel was a bunch of regulators. As Erik Voorhees said, they were basically all just talking about why their jobs are so important. I won't list all the people, but it was the SEC, IRS, staffer for a Senator, Terrorist Financing something or another, and a State Banking Supervisor.
The only thing interesting here was that the IRS lady got some pretty pointed questions, and had fluffy answers in response. Compared to merchants and developers, the regulators spoke in generalities and were pretty boring.
Speech on Law Enforcement Considerations
Stuart Tryon from the US Secret Service gave an incredibly boring and uninformative presentation about...what the Secret Service does, I guess. It wasn't really related to digital currencies at all and everyone was just waiting for lunch to start by that point.
Lunch
It was pretty good.
Fifth Panel
This panel was about the global view of bitcoin. David Johnston from BitAngels had good comments about the benefits of bitcoin to other countries.
Last Panel
The last panel was about consumer protection and privacy, and was another good panel. Joshua Fairfield, professor of law was very knowledgeable about bitcoin (and surprisingly, sidechains), and had good thoughts. Berin Szoka, from TechFreedom, was very direct in saying that bitcoin could deliver on the promise of revolutionizing government that the original internet advocates promised in the early 90's.
We then finished with workshops about various areas, I was in the privacy workshop. Academic types wanted to know how we could work with regulators to comply only when necessary, the tech types were basically saying that the cat is out of the bag and any attempts to tie identity to addresses would be rejected by the community and wouldn't be technologically feasible.
Conclusion
In general, regulation was a major theme, whether or not the self-regulation model of DATA was sufficient or if more regulation was needed from government. Most seemed to recognize that technology specific regulation is a bad idea, but other than a few tech types everyone bought the premise that complete anonymity isn't a good thing, so the talk was how to apply existing regulation like anti-money laundering and know your customer laws in the least restrictive way.
Overall, it was good for networking and for the community to show the regulators that we aren't all radical, and hope they leave us alone...at least until the network effects are too strong to take down. Then we can be radical.

Mining is a record-keeping service. [note 10] Miners keep the block chain consistent, complete, and unalterable by repeatedly verifying and collecting newly broadcast transactions into a new group of transactions called a block. The new block must contain information that chains it to the previous block and gives the block chain its name. It is a cryptographic hash – bitcoin uses SHA-256 ... David Andolfatto gives a nice explanation of how blockchains are updated in a companion article in this Review (Andolfatto, 2018), as do Berentsen and Schar (2018). No one owns the blockchain, but it is distributed among the community of users. That is, it is a "distributed ledger." ... Bevand, M. "Bitcoin Mining Is Not Wasteful," Blog post ... Bitcoin is open-source software designed to govern a money and payment system without the aid of conventional intermediaries like chartered and central banks. The role of chartered banks as payment processors is replaced by a communal consensus protocol (mining), where transaction histories are recorded on an open ledger (the blockchain). Tell us a little bit about what mining bitcoin is? Andolfatto: Yeah. Mining is a bit of a misnomer. I guess I understand where it came from because literally it seems like what people are doing is discovering new deposits of electronic gold, if you like. But in fact, the miners are accountants. They’re charged with the responsibility of ... I came across a presentation of Bitcoin the other day called The Trust Machine: The Story of Bitcoin. ... David Andolfatto writes Cochrane on why debt matters. Tyler Cowen writes The Fractured-Land Hypothesis. ... Those agencies that have invested heavily in mining equipment have more say than others. Concentration of mining power is a concern.

David Andolfatto, How Big Is Bitcoin, and Is It Stable?

The virtual goldrush to mine Bitcoin and other cryptocurrencies leads us to Central Washington state where a Bitcoin mine generates roughly $70,000 a day min... So, how is bitcoin different? First, it is a virtual currency with zero intrinsic value and no legal backing. Second, it has no central bank to manage the mo... St. Louis Fed Economist David Andolfatto provides a look at the evolution of money and the long tradition of new currencies competing with old ones. Here, he also discusses the bitcoin competitors ... Does bitcoin facilitate illegal trading? Sure, St. Louis Fed Economist David Andolfatto says, but so does the U.S. dollar, gold, etc. Bitcoin transactions tr... Buy Raspberry Pi 4 Model B 4GB: https://amzn.to/2tlBfGW How to Setup a Raspberry Pi 4 Bitcoin Mining Rig w/ Bitmain AntMiner U3: https://youtu.be/dPWTSytzN7g...